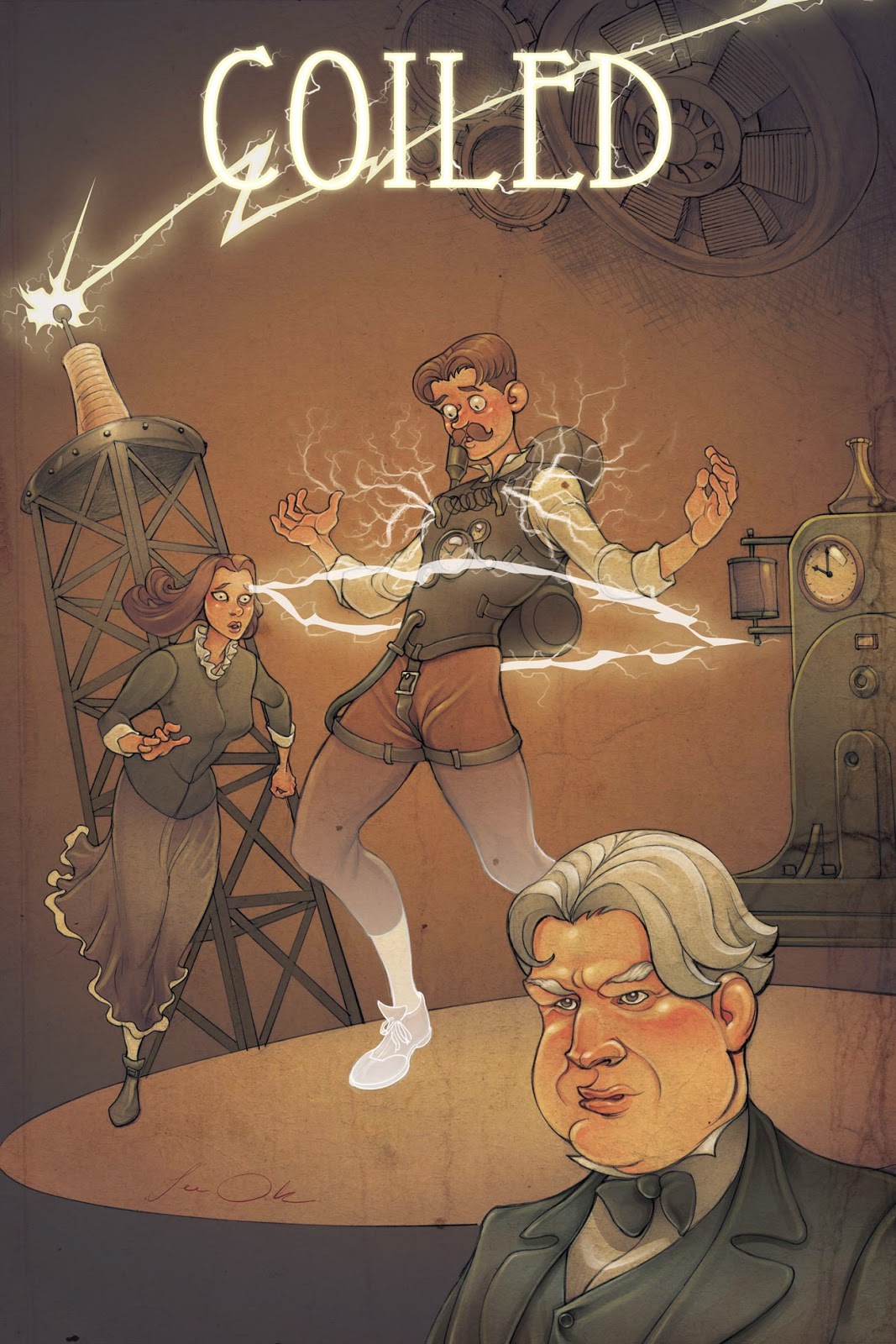 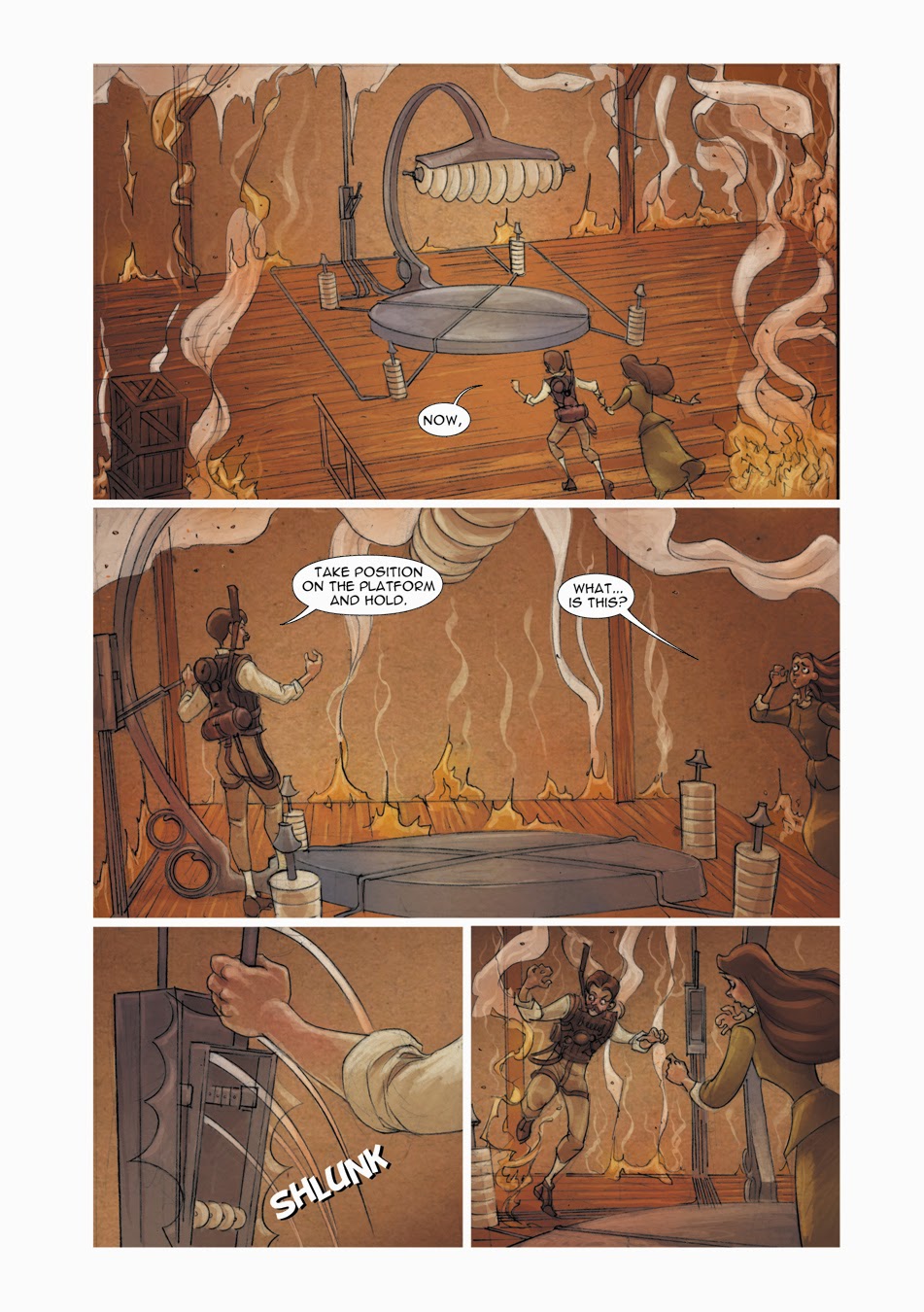 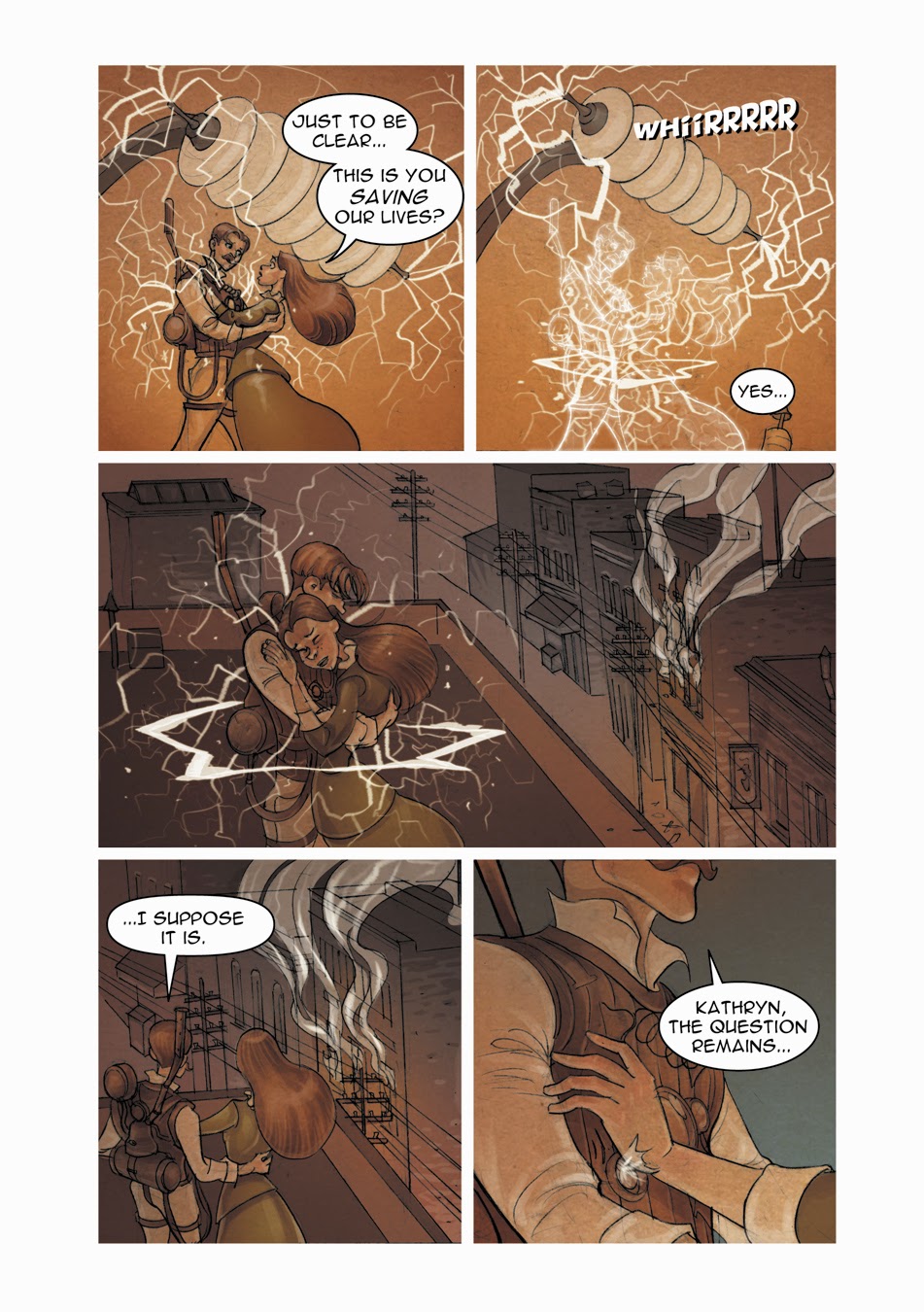 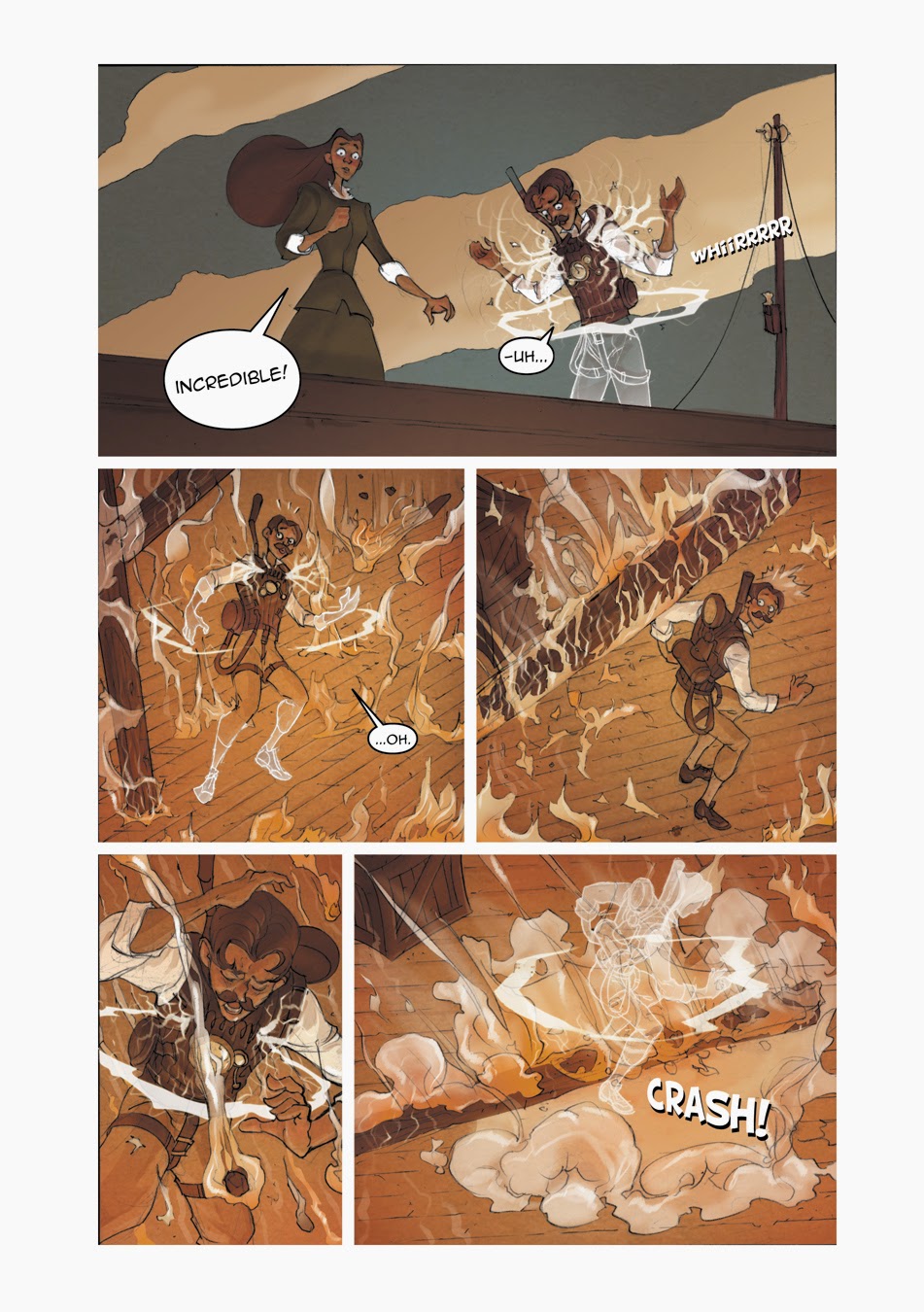 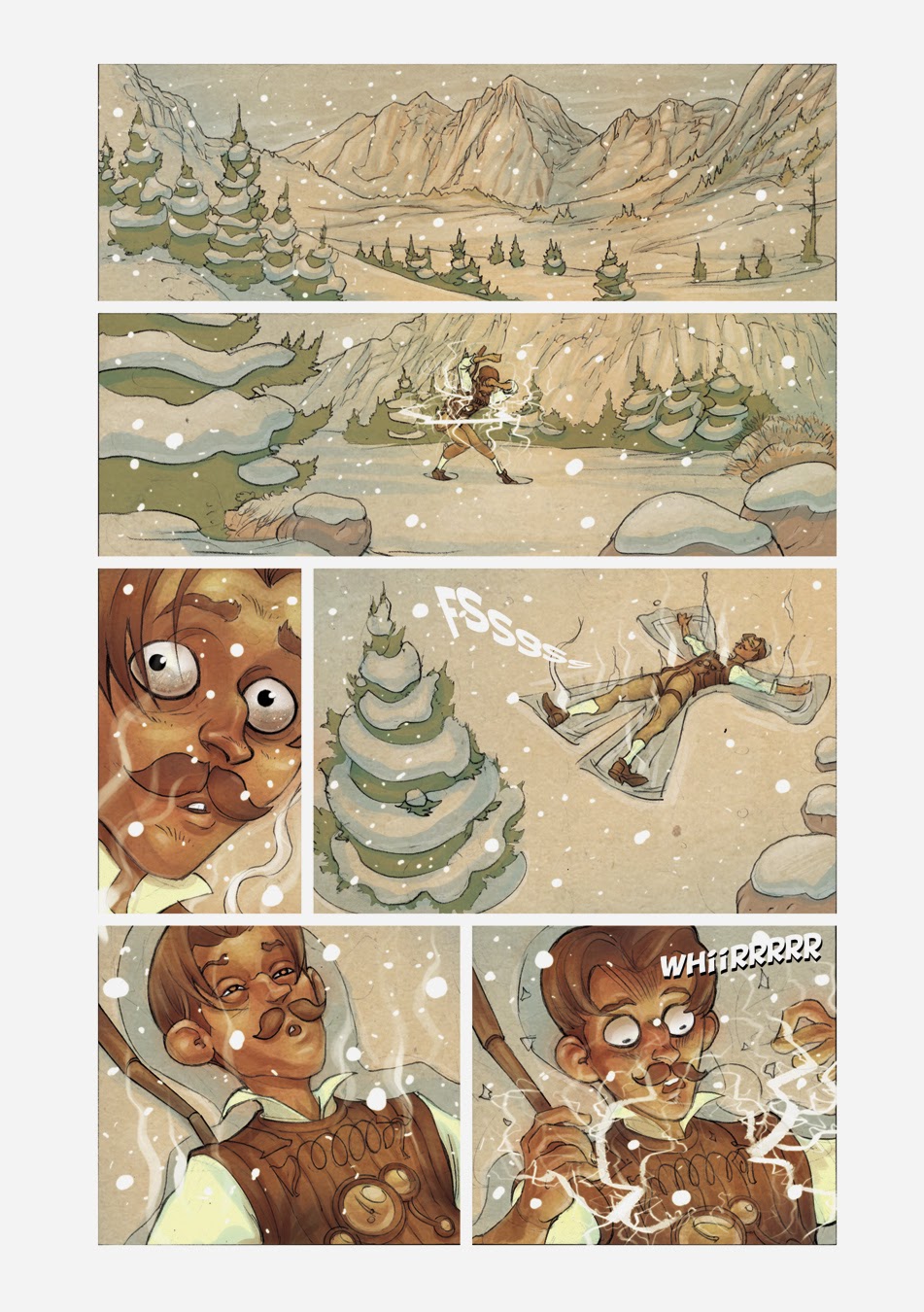 Nikola Tesla VS. Thomas Edison Steampunk Adventure concept Nathan Bowden "Riding Shotgun" and I put together.  Coiled… is set in this almost Dickensian environment, the dirty city streets of the late 1890’s but quickly soars into the fantastic with its Sci-fi elements.  Sherlock Holmes-style take on the man who invented the 20th century, Nikola Tesla. The story will weave true, documented events into a compelling game of cat-and-mouse between two fascinating historical figures and provide an explanation for the mysterious Tunguska blast of 1908.
The book depicts Tesla as something of a reluctant, action hero forced into dire situations by Edison.  Our American hero is twisted into a villain, torturing animals and committing murder to further his own agenda and spite his rival.
Posted by LEE OAKS! at 2:01:00 PM

Find out more about the Monkey with exploding skin.

I am always interested in freelance artist inkers and colorists. Send me a short e-mail with a link to your samples. ie. site, blog, deviantart, comic space, etc...

Confessions of a Cereal Eater
NBM

Alongside Night The Graphic Novel
Pulpless.com

Escape from Terra signing at Mile Hi
For anyone who has never been, the Mile Hi Jason street store is now the biggest comic book store in the world! They conduct auctions and invite guests like Chris Claremont, Jim Shooter and... myself!
It really is cool to have that so close to home. The owner, Chuck, is a great guy.

Escape from Terra vol. 1 official release. Escape from Terra is now available from comic shops and amazon and the like. We had a great time at San Diego Comic-Con 2010! It was great to meet readers of EFT. It was also the first time I met Frank Bieser, the man behind Big Head Press. He is a great guy and knows his comics!

It was a thrill catching up with old friends. Everyone should check out my friend Pj Tamayo's, A Light in the Darkness - Star Wars Fan Film, a finalist in the big celebration. I also scored some doodles by the Hernandez brothers, Mark Schultz, Pia Guerra and Ethan Nicolle to name a few. My big score for the con was an original Scott Hampton Batman page! Thanks again Scott!

Escape from Terra, Vol. 1
Sandy Sandfort, Scott Bieser and Lee Oaks, Big Head, $12.95 paper (189p) ISBN 978-0-9743814-7-3
The vision of outer space as a neo-American wild west has long fascinated sci-fi fans and writers, and this graphic novel continues the tradition, blending adventure stories of evil empires and assassins with a heavy dose of libertarian philosophy. This collection of two years' worth of the Web comic assembles the story of an anarchist asteroid society rebelling against a totalitarian Earth government that seeks to expropriate its wealth to maintain a collapsing welfare state. The colorful cast includes the French (natch) bureaucrat Guy and his voluptuous assistant, Fiorella, who both come to sympathize with the space colonists' plight. The stylish realism of Bieser and Oaks' artwork is a treat while the story wears its agenda on its sleeve. The scientific and political discussions of the second and third stories are particularly engaging, and anxiety about tax-hungry unsustainable governments is certainly a timely theme if one looks at Greece or the Tea Party movement. While the idealization of anarchy goes all the way to gun-toting freedom-loving colonists who decide to throw due process under the bus, this is still a throwback to science fiction with ideas. (July)

Pencils for TALES OF TRALODREN the graphic novel written by Chad Corrie art by Lee Oaks!

I also illustrate a sci-fi adventure strip called Escape from Terra at: